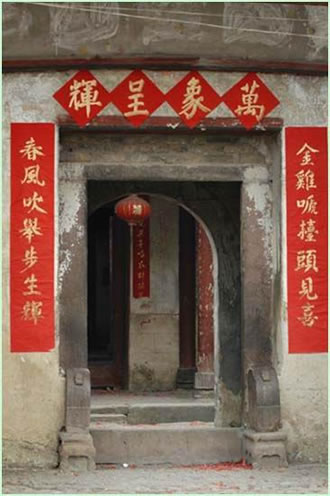 Today is Chinese New Year. Having lived in China for 12 years, I had the chance to not only witness and share in that celebration many times, but I also learned firsthand about some of the tradition behind it. See if anything strikes you as familiar about this story:

A long time a go, a terrible beast roamed the land at the end of every year, seeking to devour children and livestock. But the people learned that the beast feared (among other things) the color red. So on the night before the new year, the people would cover their door frames and windows with red. Any child inside such a home would be safe, because the beast would pass over that house. And so, to this day, in celebration of Chinese New Year, every home puts up red decorations - lanterns, paper art, words of blessing - around the doors and windows.

No, I did not just make that up. And I'm not the first to notice the amazing similarity between that legend and the true story of the Passover (Exodus 12:1-14). Now, whether China somehow heard word of God's miraculous deliverance of his people in Egypt or whether it's just a divine "coincidence" is up for debate. There's nothing conclusive to lead us to either view. But the similarities are striking: a threat of death over the children, red/blood as a deterrent, decorating door frames with red, beginning a new year. Others have noticed even more similarities in the way these events are celebrated in their respective cultures.

But there is also a significant difference. The threat facing God's people was the righteous judgment of God himself. The beast is not frightened away by what he sees on the door, but instead sees that death's work has already been done in that household. That is the beauty of the Passover. Wherever the lamb had died for a family, that family would live. In Christ (who is our Passover lamb - 1 Corinthians 5:7), we see the same thing. Because his sacrifice has been made in our place, we live, knowing the judgment of God has passed. In both the Chinese and Jewish traditions, this event signaled the start of a new year. For the believer, as well, the death of our Lamb in our place marks the beginning of the newness of life.

Now, is this on the mind of our Chinese friends as they decorate their homes for the new year? Probably not. But let us thank God for the way in which he prepares hearts for his good news, even planting seeds in the traditions of cultures and nations over the centuries. And let us always pray that those seeds would produce a harvest of righteousness.